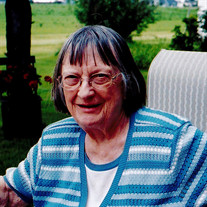 She was preceded in death by 2 sisters, 1 brother and twin great grandsons.

Juanita attended Minonk schools and graduated from Minonk Community High School in 1937. She later graduated from Liberty Beauty School in Peoria. She owned and operated Cinderella Beauty Salon in Minonk until she retired in 1982.

She was a member of Immanuel Lutheran Church, Minonk where her funeral will be held at 11:00 a.m. on Monday, December 29, 2014. Rev. Daniel Tuhy will officiate. Burial will be in Minonk Township Cemetery. Visitation will be on Sunday, From 3 to 5 at Ruestman-Harris Funeral Home, Minonk and for one hour prior to services on Monday at her church.

Memorial contributions may be directed to the Minonk Ambulance Squad or Immanuel Lutheran Church. Online condolences and Juanita's tribute video may be viewed at www.ruestmanharrisfuneralhome.com

To send flowers to the family or plant a tree in memory of Juanita Jacek, please visit our floral store.

Please click here to view the video tribute
To send flowers to the family in memory of Juanita Jacek, please visit our flower store.