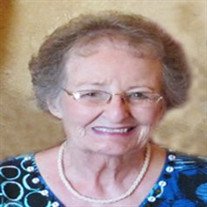 Normal-Joyce A. Scott, 80, of Normal, IL, formerly of El Paso, IL, passed away at 12:05 p.m., Monday, June 9, 2014 at Advocate BroMenn Medical Center in Normal, IL.
She was born June 2, 1934 in Minonk, IL a daughter of Paul E. Robertson and Kathryn Mouser Robertson. She married Joseph A. Scott on June 30, 1956 at St. Patrick's Catholic Church in Minonk. They were married 56 years until his death on May 22, 2013.
Joyce has two daughters, Julie (John) Nixon of Normal; Lori (Divyesh) Bhatt of Naperville; two granddaughters, Marissa and Jenna Bhatt, both of Naperville. She has two sisters, Mary Bohlander of Bloomington; Nancy Robertson of Minonk; and a brother, Michael Robertson of Naylor, MO.
She was preceded in death by her parents and one brother in addition to her dear husband.
Joyce graduated from Minonk-Dana High School and went to beauty school. She had a salon in her home in El Paso. In addition she has worked several clerical jobs, including State Farm, at Jefferson Park Grade School and for Manpower Inc. But by far the job she was best at was being the devoted wife to Joe, her soulmate, proud and loving mother to her two daughters and exceptionally doting grandmother to her two granddaughters, who are now beautiful young women.
Her Catholic faith has always been an important part of her life and she was a life-long member of St. Mary's Catholic Church in El Paso. After moving to Normal, she attended St. Mary's Catholic Church in Bloomington.
Joyce enjoyed socializing with friends, going to movies, watching TV, she enjoyed her flowers and when she and Joe were younger, they enjoyed bowling and playing cards with their friends. When her children were young she taught CCD classes and was active in the Altar and Rosary Society in El Paso.
She had recently moved to Blair House Independent Living Community in Normal, and although she was only a resident for one month, she loved her apartment and the people there. We thank them for the kindness shown to Mom while she was there.
Joyce's funeral Mass will be held at 10 a.m., Thursday, June 12, 2014 at St. Mary's Catholic Church in El Paso with Father Donald Roszkowski officiating. Visitation will be one hour (9 a.m.) prior to the mass. Burial will be in St. Joseph Catholic Cemetery in El Paso. Ruestman Harris Funeral Home is in charge of arrangements.
In Lieu of flowers, memorials may be made to the El Paso Rescue Squad.
Online tributes and condolences may be made at www.ruestmanharrisfuneralhome.com.


To send flowers to the family or plant a tree in memory of Joyce A. Scott, please visit our floral store.

Please click here to view the video tribute
To send flowers to the family in memory of Joyce Scott, please visit our flower store.