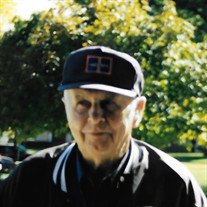 He was born in Minonk on October 16, 1924 a son of the late Michael A. and Sara Hock Petri.
He married Ruth Smith in Minonk on October 12, 1947 and she preceded him in death in 2009.
Surviving are his siblings, Norbert (Dorothy) Petri, Minonk; Virgil (Jeanne) Petri, Metamora; Mary Ford, Minonk; sisters-in-law, Joann Petri, Flanagan; Norma Fox, Boulder, CO; brother-in-law, Glen Smith, Flanagan; and several nephews and nieces.

He was preceded in death by 5 brothers, and a brother and sister in infancy.

Joe was employed in Benson in farming until he joined the Army in 1943. He was stationed in Alaska as a warehouse guard. Six of his brothers also served in the war and they all came home. He was honorably discharged in 1945. Upon returning he worked in farming briefly and then joined his brothers, Virgil and Eugene in the manufacturing and installation of grain equipment. He worked all over the state as a millwright until Petri Brothers closed in 1995. After that he continued to help farmers in the spring and fall. He loved his German Shepherd dogs, fishing, motorcycles, gardening, travelling and cards.

He was a member of St. Patrick's Catholic Church in Minonk where a mass of Christian burial will be celebrated at 11 AM ,on Friday February 27, 2015. Franciscan Friars will officiate. Visitation will be from 4-7 PM on Thursday evening at Ruestman-Harris Funeral Home in Minonk with a Rosary to be recited at 3:45 PM. Interment will be in St. Patrick's Catholic Cemetery, Minonk where military honors will be presented.

The family would like also like to express a great deal of gratitude for the care that was given to Joe at the Illinois Veteran's Home.

In lieu of flowers, memorials may be given to the Illinois Veteran's Home, 1015 O'Conner Ave., LaSalle, IL 61301, or St. Patrick's Catholic Church, Minonk.
Online condolences may be directed to his family at www.ruestmanharrisfuneralhome.com


To send flowers to the family or plant a tree in memory of Joseph A. "Joe" Petri, please visit our floral store.

Please click here to view the video tribute
To send flowers to the family in memory of Joseph Petri, please visit our flower store.