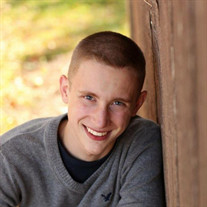 Joey was born on October 2, 1997 in Streator, IL a son of John Buis and Amanda Griffin.

He was preceded in death by his grandfather, Gerald Ray Buis, uncles, Robert Roney, Jr. and Kevin Joseph Griffin, and aunt, Lynette Griffin.

Joey worked at the Monical's Pizza in El Paso, Grosenbach Grocery in Minonk, and Petri's Pour House in Minonk.

Joey was a senior at Fieldcrest High School in Minonk class of 2016 and also attended Bloomington Area Career Center for Auto Mechanics.

Through the Gift of Hope Joey has already saved four lives by being an organ donor. He will continue to light up rooms with his smile through others.

In lieu of flowers, memorials may be made to the family. Online condolences may be sent to the family at www.ruestmanharrisfuneralhome.com.


To send flowers to the family or plant a tree in memory of Joseph "Joey" Allen Ray Buis, please visit our floral store.

To send flowers to the family in memory of Joseph Buis, please visit our flower store.