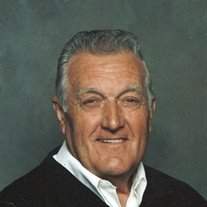 He was born on June 22, 1930 in Roanoke, IL to Joseph and
Teresa Merlo Amigoni. He marriedAntoinette "Toni" Kracl on
September 25, 1954 in Schuyler, Nebraska. She survives.

He was preceded in death by his parents and three
brothers, Alex, Eli, and Phillip Amigoni.

An Air Force veteran, Bing served his country overseas in Korea
during the Korean War. He was a member of the Roanoke American
Legion Post #463 for over 50 years.

Bing graduated from Roanoke-Benson High School in 1948. He was
an operating engineer and was a member of the Operator Engineer's
Union #649 for 59 years. He worked for Amigoni Construction in
Roanoke, then worked for C.A. Powley for 20 years and then finished
his career working another 20 years for Stark Excavating in
Bloomington.

Bing was always willing to give of himself to serve others. He
served the Village of Roanoke for 26 years, serving on the city
council and also serving as mayor. He was a die-hard Cub fan and
enjoyed spending time with others playing golf and especially bocci
ball.

Funeral Mass will be held at 10:00 am on Tuesday December 10,
2013 at St. Joseph Catholic Church in Roanoke. Fr. Neri Greskoviak
will officiate. Visitation will be held on Monday December 9 from
4-7 pm at Knapp-Johnson-Harris Funeral Home in Roanoke. Burial with
military rites will be in the Roanoke Township Cemetery.

Memorial contributions may be made to St. Joseph Catholic Church
Knights of Columbus or to the Illinois Cancer Care Foundation 8940
N. Wood Sage Road, Peoria, IL 61615. Online condolences may be sent
to the family at www.knappjohnsonharris.com.

To send flowers to the family or plant a tree in memory of Joseph "Bing" Amigoni, please visit our floral store.

To send flowers to the family in memory of Joseph Amigoni, please visit our flower store.