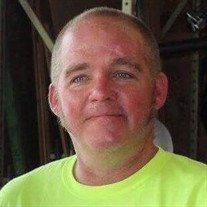 He was born October 23, 1973 in Mesa, AZ to John D. and Roberta "Bertie" Stuart Vitale. He first married Allyson McCollum and later married Shannon Halloran on September 29, 2012 in Wenona, IL. She survives.

He was preceded in death by his step-father Wayne Soeder in 2005, two nieces, Katelyn and Ruby and his grandfather Robert Stuart in 1993.

Johnny worked as the body work man for several area auto shops. He was currently working for Uftring Automotive in Minonk. He did his apprenticeship at Heller Ford in El Paso and went on to work for Sons of Color in Wenona and Minonk Autobody. He had a passion for cars and was one of the best known autobody guys in the business.

Johnny was a jokester and always liked to have fun. He enjoyed camping and racing. He touched the lives of many and will be missed.

Visitation will be held from 4 to 7 p.m., on Tuesday, July 11, 2017 at Ruestman-Harris Funeral Home in Minonk. There will be no formal service. Cremation rites will be accorded.


To send flowers to the family or plant a tree in memory of John "Johnny" R. Vitale, please visit our floral store.

Please click here to view the video tribute
To send flowers to the family in memory of John Vitale, please visit our flower store.