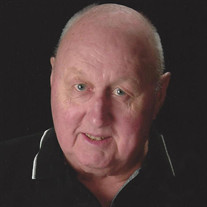 El Paso - John P. Tucker, 75, of El Paso, passed away at 11:12 am on Tuesday, July 25, 2017 at Advocate Bromenn Medical Center in Normal.
Private family services will be held at a later date. Cremation rites have been accorded. Memorials may be given to El Paso Rescue Squad or El Paso Fire Department. Ruestman-Harris Funeral Home in El Paso is assisting the family with arrangements.
John was born on December 25, 1941 in Chicago, Illinois, a son to Lloyd and Sally Shedden Tucker. He married Linda L. Stilwell in Pontiac, Illinois on August 4, 1969. She preceded him in death on February 13, 2016.
Surviving are his sisters-in-law, Jeannie (Buddy) Walls, Becky Stilwell, both of Pontiac; nieces, Wendy Walls of Pontiac, Susan (Jeff) Laborence of Odell, Sherry (Mark) Williams of Normal, Barb (Jim) Pritz of Normal, Kirstin Reid of Bedford, TX, Marren Lyon,of Harlan, IA, Robin Stilwell of OK; nephews, David (Jen) Walls of Pontiac, Scott (Sharon) Stilwell of SC, Jim (Shelly) Stilwell of OK, Adam Stilwell of Bradley; and many great nieces and nephews; and good friends, Teresa, Anna, and Neil Gauger.
He was preceded in death by his parents, his wife, one brother and one sister.
John graduated from El Paso High School. He proudly served his country in the United States Navy and went on to work for Caterpillar in Peoria and later Feeney Oil.
He was a member of the El Paso VFW for many years and also at Kappa Golf Course and he also enjoyed spending time with his friends at Topsy's in El Paso. John lived and breathed ‘Da Bears' and spent many years attending Chicago Bears' training camps and games.

To send flowers to the family or plant a tree in memory of John P. Tucker, please visit our floral store.

To send flowers to the family in memory of John Tucker, please visit our flower store.