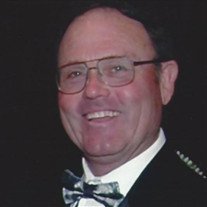 He was preceded in death by his parents, one sister, and two twin grandsons.

John graduated from Minonk-Dana-Rutland in 1959. He had worked for Owen Glass Co. in Streator, Sauder and Rippel in Minonk, and then later for McCormick Petroleum in Minonk. He also worked part time in auto parts at Napa in Minonk.

He enjoyed collecting Allis Chalmers toy tractors, spending time with his family and grandchildren, and wintering in Arizona. He earned the nickname of "Windy" honestly and enjoyed riding his motorcycle. He was a member of the Knights of Columbus #985 in Minonk.

John was a member of St. Patrick's Catholic Church in Minonk where a Mass of Christian burial will be held at 10:00 am on Friday, August 19, 2016. Franciscan Friars will officiate. Visitation will be held from 4-7 pm on Thursday at the Ruestman-Harris Funeral Home in Minonk and one hour prior to services at the church on Friday. A rosary service will be held at 3:30 pm at the funeral home prior to the visitation. Burial will be in St. Patrick's Catholic Cemetery.

Memorial contributions may be made to St. Jude Children's Hospital in honor of Alex and Bryce McKay or Mass offerings given. Online tributes and condolences may be sent to www.ruestmanharrisfuneralhome.com.


To send flowers to the family or plant a tree in memory of John R. McKay, please visit our floral store.

Please click here to view the video tribute
To send flowers to the family in memory of John McKay, please visit our flower store.