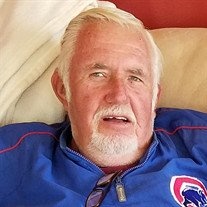 He was preceded in death by his parents, three sisters, JoAnn Smith, Doris Eyman, and Lois Boulware; and one brother, Doug Rathbun.

Dick worked at the Shell Gas Station in El Paso for many years. He then went on to work for Caterpillar, American Builders, and El Paso Automotive.

Dick worked for many years as an auto mechanic. He served on El Paso's city council several years. After retirement he enjoyed spending time with his family, mowing, following his favorite sports teams, and tinkering in the garage.
A Memorial Service will be held at 11:00 am on Wednesday, April 19, 2017 at the Ruestman-Harris Funeral Home in El Paso. Rev. Mike Oleniczak will officiate. Visitation will be Tuesday evening from 4-7 pm at the funeral home. Inurnment will be in Evergreen Cemetery in El Paso.

Memorials may be directed to the Dick Jones Relay for Life Team for American Cancer Society. Online condolences may be sent to www.ruestmanharrisfuneralhome.com.


To send flowers to the family or plant a tree in memory of John R. "Dick" Jones, please visit our floral store.

Please click here to view the video tribute
To send flowers to the family in memory of John Jones, please visit our flower store.