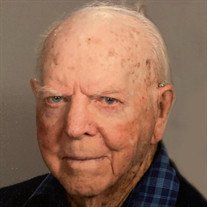 Jack was born on October 31, 1920 in Des Moines, Iowa and attended a one-room school house until 8th grade. He grew up near a coal mine and every winter he would ride and play with the pit ponies. After graduating from high school Jack was hired by Caterpillar to make wooden molds for engines in Peoria, IL and worked there until 1954.

Jack served in the Navy during WWII from 1944 - 1946. He was on the torpedo team of the USS Tingey. He had met his future wife Rita McNamara before the war, and when he returned home, he knew he had to find her again. They met by chance at a movie theater, started dating and got married on April 3, 1948. They were happily married for 72 years.

Jack and Rita bought their first farm in Bradford, IL in 1949 where their daughter Janet was born. They moved to Gridley where their son Edward was born, and eventually they bought a 160-acre farm in Minonk to be near a Catholic school. Their children Patricia, Timothy and Mary were born while they lived in the Minonk area.

Jack worked as a skilled patternmaker and created beautiful woodwork throughout his life, blessing his children and grandchildren with his talents. He loved to farm, and finally stepped off the combine after 67 years. He continued helping his son farm for several years after he "retired". He also enjoyed golf and bocce ball tournaments at his winter home in Tucson, AZ. He was a Grand Knight of the Knights of Columbus and served as Commander for the American Legion.

He joins his parents Mary (Kelly) and John Conroy, his sister Helen (Breese), his brother James, his son Timothy Conroy, his daughter Janet Miggins, and his son-in-law Richard Craig in peaceful rest.

Jack lived an incredibly full and blessed life. He was a faithful Catholic and loved the Lord. He truly enjoyed being active and worked hard his entire life. He was known as Jack, Dad, Grandpa, Great Grandpa and Grandpa Great by his loved ones. He was a great storyteller and always generous to those around him, always insisting on paying for dinner for all his kids and grandkids. An avid reader, Jack was a regular member of the Minonk Library and especially liked reading autobiographies and mysteries.

His faith, perseverance and deep love for his wife will always be an inspiration to those who knew him. He had a wonderful sense of humor (especially when teasing his wife and kids) that will be deeply missed. Every memory he shared of his long life will be treasured by his family. Every night he would pray "Goodnight Jesus" and every morning his first words were "Thank you Jesus".

Funeral Mass will be held at 10:00 a.m. on Saturday, October 10, 2020 at St. Patrick's Catholic Church in Minonk. Franciscan Friars will officiate. Visitation will be held one hour prior to services at the church on Saturday. Burial will be in the St. Patrick's Catholic Cemetery where military rites will be accorded at the grave. Social distancing guidelines will be observed during the visitation and funeral mass, and masks are required. Ruestman-Harris Funeral Home in Minonk is handling arrangements for the family.

Memorial contributions may be made to St. Patrick's Catholic Church in Minonk. Online condolences may be sent to the family at www.ruestmanharrisfuneralhome.com.


To send flowers to the family or plant a tree in memory of John E. "Jack" Conroy, please visit our floral store.

To send flowers to the family in memory of John Conroy, please visit our flower store.