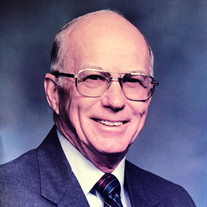 John E. Asper, 96, Flanagan ,formerly of Gridley died at 3:00 a.m. on Saturday, June 1, 2019 at Flanagan Rehabilitation Center, Flanagan, IL.
Funeral services will be at 10:00 a.m. on Saturday June 8, 2019 at St. John's Lutheran Church, Flanagan. Visitation will be for one hour prior to services. Ruestman Harris Funeral Home, El Paso is assisting the family with arrangements. Burial will be at the Gridley Cemetery with full military honors.
In lieu of flowers, the family suggests memorials be given to the American Legion of Flanagan or St. John's Lutheran Church of Flanagan.
John was born September 9, 1922 in Ocoya, son of Omar "Jack" and Margaret Reed Asper. At age 12, because his father had pneumonia, he farmed for his dad and uncles. He served in the US Navy as a motor machinist mate on an LST ammo ship that faced fierce battle in Okinawa.
Following his military service, he became a carpenter in Pontiac. On June 16, 1948, he married Carolyn Ruth Kuerth of Gridley. In 1952 they moved to Gridley where he actively farmed for the next 35 years. He was a member of the Gridley Congregational Church, the United Church of Gridley, the Masonic Lodge, and the American Legion.
John enjoyed fishing, jigsaw puzzles, card games, shooting pool with his buddies, gardening, and keeping his home in good working order. Each winter he spent several weeks in Florida. His most cherished time was that spent with his grandchildren.
After his wife's death in 2005, John met Marilyn Dishinger at the weekly Wednesday coffee club at St. John's Lutheran Church in Flanagan. They married in January 2007. He joined the Lutheran Church and participated in many trips with Marilyn sponsored by the Flanagan State Bank. Marilyn's 15 grandchildren quickly adopted him as their own beloved Grandpa. The Aspers attended sporting events to see their grandchildren in action. This expanded family helped keep John young at heart. His wife, Marilyn survives.
John never met a stranger. He always had a smile and could chat with anybody. Nearly 100 guests celebrated his 90th birthday party in Gridley. In 2013 he flew to Washington D.C. as part of the Honor Flight, a group making it possible for veterans to visit the war memorials. Grandson Eric Larson shared that special day with him. Honor Flight mail call presented him with 87 notes thanking him for his service and sacrifices to keep our country free; he felt so blessed.
Surviving are two daughters: Gloria (Steve) Larson of Oak Ridge, TN and Mary Jo (Terry) Brewer of Ocklawaha, FL; three grandsons: Kevin Larson of Bloomington, IN, Eric Larson of Sandy Springs, GA and Chad Brewer of Ocklawaha, FL; and three great grandchildren.
Also surviving are 6 step children and 15 step grandchildren; one sister: Doris King of Flanagan; one sister-in-law Joan Widmer of Bloomington.
John was preceded in death by one brother and two sisters.


To send flowers to the family or plant a tree in memory of John E. Asper, please visit our floral store.

To send flowers to the family in memory of John Asper, please visit our flower store.