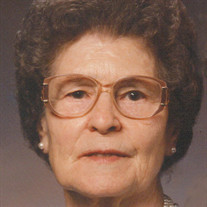 JoHanna was born on April 27, 1920 in Minonk, IL a daughter of Meinet and Marie Tesch Mueller. She married Herman W. Seggerman on October 10, 1943 in Minonk, IL. He survives.

She was preceded in death by her parents, two brothers and two sisters.

JoHanna worked at the United States Post Office in Secor from 1964-1984 where she became postmaster in 1974. She also worked at the Secor Telephone Exchange from 1950-1957.

Funeral services will be at 10:00 a.m. on Thursday, June 2, 2016 at St. John's Lutheran Church in Secor. Rev. Michael Peters will officiate. Visitation will be held on Wednesday, June 1, 2016 from 5-7 p.m. at Ruestman-Harris Funeral Home in El Paso. Burial will be in the Secor Cemetery.

Memorial contributions may be directed to St. John's Lutheran Church in Secor or Secor First Responders.Online condolences may be sent to her family at www.ruestmanharrisfuneralhome.com

To send flowers to the family or plant a tree in memory of JoHanna Seggerman, please visit our floral store.

Please click here to view the video tribute
To send flowers to the family in memory of JoHanna Seggerman, please visit our flower store.