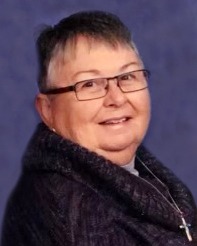 JoAnn Ruestman, 79, of Minonk passed away on Saturday, January 14, 2023 at her home with loved ones by her side.

JoAnn was born on January 25, 1943 in Streator to Darrel A. “Short” and Blanche Worrell Manchester. She married Rodney R. Ruestman on November 11, 1962 at St. Paul’s United Church of Christ in Minonk. He survives.

She was preceded in death by her parents and daughter-in-law, Jackie Ruestman.

JoAnn worked over the years at Minonk State Bank. Minonk Baking Co., Green Tree Pharmacy in Minonk, and retired from The Woodford Co. Sherriff’s office as a telecommunicator. She was also a Matron of Woodford County and the first female Councilperson in Minonk. She was a loving wife, mom, and grandma who always put others first.

Funeral services will be held at 11:00 a.m. on Friday, January 20 at St. Paul’s United Church of Christ in Minonk. Pastor Jay Hurd will officiate. Burial will follow at Minonk Township Cemetery. Visitation will be from 4-7 p.m. on Thursday, January 19 at Ruestman-Harris Funeral Home in Minonk.

Memorial contributions may be directed to St. Paul’s United Church of Christ in Minonk.

Online condolences and tributes can be sent to family at www.ruestmanharrisfuneralhome.com

To send flowers to the family in memory of JoAnn Ruestman, please visit our flower store.