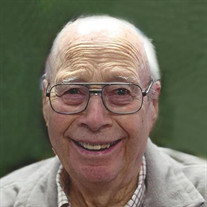 He was preceded in death by his parents, one sister, and one brother.

Jesse was veteran of WWII serving his country with the United States Coast Guard. He farmed in the El Paso area all of his life.

He was a member of the El Paso American Legion #59 and Woodford County Legion where he served as past commander for both. He was a former member of the Farmers Club and Bloomington Bowling Association Hall of Fame.

The family wishes to thank Heritage Health in El Paso for the excellent care given to their father during his stay.

Memorials may be directed to the El Paso Food Pantry or a charity of the donor's choice. Online condolences may be sent to the family at www.ruestmanharrisfuneralhome.com.


To send flowers to the family or plant a tree in memory of Jesse Carrithers,, please visit our floral store.

Please click here to view the video tribute
To send flowers to the family in memory of Jesse Carrithers,, please visit our flower store.