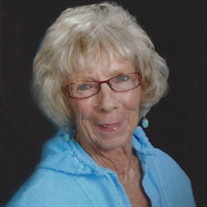 She was born on February 19, 1940 in Streator, IL a daughter of Walter and Mary Jane Payne Osterman. She married Harold E. Tjaden on June 13, 1960 in Minonk, IL. He survives.

She was preceded in death by her parents, one daughter Leann; and a sister Nancy Riley.

In her earlier work career, Janet was a secretary for Leiken and Leiken Law office in Minonk. She also did book work for Davis Bros. Tiling and Excavating. She was the Minonk city clerk for 20 years during this time period. She was also one of the first two females to join the Minonk Ambulance Squad. In her later working years she was employed by SMF as an administrative assistant and part of the human resource department.

She was a member of the Minonk United Methodist Church.

Funeral services will be held at 11:00 am on Wednesday, May 13, 2015 at the Ruestman-Harris Funeral Home in Minonk. Janet's brother-in-law, Rev. Don Riley and Rev. Donna Baker will officiate. Visitation will be Tuesday evening from 4-7 pm at the funeral home. Burial will be in Minonk Township Cemetery.

She was a very loving wife, mom, and grandma and was extremely proud of all of her grandchildren's accomplishments.

Memorials may be made to the Janet Tjaden Memorial Fund for various organizations in Minonk. Online condolences may be directed to her family at www.ruestmanharrisfuneralhome.com


To send flowers to the family or plant a tree in memory of Janet L. Tjaden, please visit our floral store.

Please click here to view the video tribute
To send flowers to the family in memory of Janet Tjaden, please visit our flower store.