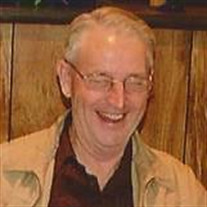 He was preceded in death by his parents, 1 brother and 4 sisters.

James was a member of St. John's Lutheran Church in Secor. He also belonged to the Secor Sportsman's Club and the American Legion Post in El Paso, and the Retired State Employees Association. He was a Trustee for Palestine Twp. and was also a city councilman in Secor and a Republican Precinct Committee man. He served in the Navy during the Korean War and he retired from the State Highway Maintenance Department in 1998 after 20 years of service.

Funeral services will be held on Saturday, October 31, 2015 at 11:30 AM at St John's Lutheran Church with Rev. Michael Peters officiating. Visitation will be from 10 AM until the time of service at the church and interment will be in Secor Cemetery. Ruestman-Harris Funeral Home in El Paso is assisting the family with arrangements.

The family would like to give a special thanks to the Maple Lawn staff and community for the care James received during his stay there.

Memorials may be designated to the American Alzheimer's Association. Online condolences may be directed to his family at www.ruestmanharrisfuneralhome.com

To send flowers to the family or plant a tree in memory of James R. Wilkey, please visit our floral store.

To send flowers to the family in memory of James Wilkey, please visit our flower store.