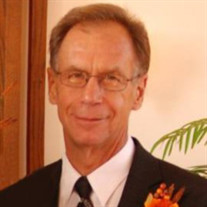 He was preceded in death by his parents, one sister Lynda and one daughter Nicole.

James proudly served his country in the U.S. Army during the Vietnam War. After the war he worked for Caterpillar at the Mossville plant for 30 years.

He was a member of the Rutland American Legion Post # 1121.

Due to Covid-19 a private family burial will take place on April 29, 2020 at Rutland Cemetery. Ed Sinclair will officiate the service. Cremation rites have been entrusted to Ruestman-Harris Funeral Home in Minonk.

Memorial contributions in honor of James may be directed to the Rutland American Legion Post # 1121 or St Jude's Children's Hospital Midwest Affiliate.

To send flowers to the family or plant a tree in memory of James Michael Weiland, please visit our floral store.

To send flowers to the family in memory of James Weiland, please visit our flower store.