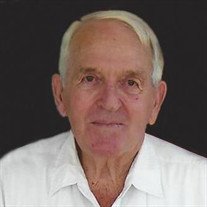 He was preceded in death by his parents, 1 brother, 1 sister, 1 son; Ronnie, and 2 grandchildren.

He attended El Paso Schools and he and his wife were dairy farmers in the Roanoke and El Paso area until their retirement in May 2000.

James was a loving father and grandfather and will be deeply missed.

In lieu of flowers, memorial contributions may be directed to the American Heart Association or American Diabetes Association. Online condolences may be sent to the family at ruestmanharrisfuneralhome.com.


To send flowers to the family or plant a tree in memory of James O. Talbert, please visit our floral store.

Please click here to view the video tribute
To send flowers to the family in memory of James Talbert, please visit our flower store.