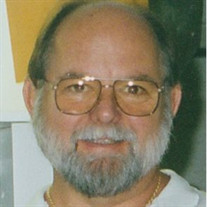 James Marco Francis Bastian, 66, of who recently moved to Cape Coral, Florida with his wife Betty in June of this year, passed away unexpectedly on August 6, 2014.

James was born in Hazel Green, Wisconsin to Marco and Margaret (Burns) Bastian on June 5, 1948. He was a graduate of Shellsburg High School in 1967 and began working for Barber Colman/Pfauter-MAAG soon after high school until he was injured on the job and unable to return to work after 1989.

He married Betty J. Malott on August 17, 1968 at Holy Rosary Catholic church in Darlington, Wisconsin. Jim was an avid Packers fan. His hobbies included hunting, fishing, traveling, coaching and spending time with his children and grandchildren.

James was preceded in death by his parents, Mary Jane "Grandma Great" (Phil) Burns and numerous aunts, uncles and nieces and nephews.

The family would like to send a heartfelt thank you to all of the police officers, EMS members, doctors, nurses and staff at Cape Coral Hospital for all of their quick response, effort, and non-stop attention given to Jim during his time of need.

A Memorial Mass will be held at 11 a.m., Saturday, August 16, 2014 at St. Mary's Catholic Church in El Paso, IL. Father Don Roszkowski will officiate. A celebration of life visitation will be from 5 to 7 p.m. Friday, at Ruestman-Harris Funeral Home in El Paso. Cremation has been accorded.
Memorials may be made to the American Heart Association.

Online tributes and condolences may be made at www.ruestmanharris.com.


To send flowers to the family or plant a tree in memory of James Bastian, please visit our floral store.

Please click here to view the video tribute
To send flowers to the family in memory of James Bastian, please visit our flower store.