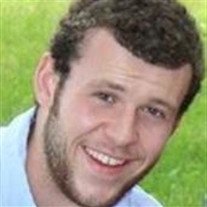 El Paso- Jacob C. "Jake" Miller, 18 of El Paso passed away at 3:15 p.m. on Friday, January 2, 2015 at his residence.
Jake was born August 21, 1996 at Normal a son of Ed and Lora Messer Miller.
Survivors include his parents, Ed and Lora Miller, El Paso; a sister, Lauren Miller, Memphis, TN; maternal grandmother, Linda Messer, El Paso; paternal grandparents, Carl and Barb Miller, El Paso; uncle, Larry (Susan) Messer, Goodfield; aunt, Angela (Bruce) Anderson, Orion and many cousins and special friends.
He was preceded in death by his maternal grandfather, Lloyd Messer and his paternal and maternal great grandparents.
Jake attended Eastview Christian Church, Bloomington where a celebration of his life will be held at 1:00 p.m. on Tuesday, January 6, 2015. His family will receive friends following services at the church. Rev. Mike Baker will officiate. Ruestman-Harris Funeral Home is assisting his family with arrangements.
Jake was a Senior at University High School, Normal where he was captain of the swim team. He was a member of the 2014 U High State Champion swim team. He was a 4 time State Champion in the 200 IM, 500 freestyle and 200 and 400 freestyle relay. He was ranked 10th in the nation as a high school recruit and had signed a national letter of intent to swim at the University of Louisville. He had qualified for the 2016 Olympic Trials in the 400 IM. He was a member of the Redbird Swim Club and USA Swimming.
He volunteered for the Special Olympics, Heritage Manor Nursing Home, El Paso and had participated in the Spina Bifida Walk.
Jake was a fierce competitor in the pool but was even better as a young man, always helping others, giving credit and thanking his coaches and teammates. These same virtues were displayed by Jake being and organ and tissue donor.
Memorial contributions in Jake's honor may be directed to the Jake Miller Memorial Fund, c/o Flanagan State Bank 111 N. Fayette St., El Paso, IL 61738.
Online tributes and condolences may be sent to his family at www.ruestmanharrisfuneralhome.com.

To send flowers to the family or plant a tree in memory of Jacob C. "Jake" Miller, please visit our floral store.

Please click here to view the video tribute
To send flowers to the family in memory of Jacob Miller, please visit our flower store.