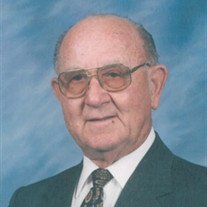 Bloomington - Jack C. Jolliff, 89,
of Bloomington passed away at 3:40 p.m. on Wednesday, February 26,
2014 at Advocate BroMenn Medical Center in Normal.

His funeral will be held at 11:00
a.m. on Monday, March 3, 2014 at Kibler-Brady-Ruestman Memorial
Home in Bloomington with Rev. Jay Regennitter
officiating.   Visitation will be from 2-5 p.m. on
Sunday, March 2, 2014 and one hour prior to the service at the
memorial home on Monday.

Masonic Rites will be accorded at 5
p.m. on Sunday following the visitation.  Military Rites will
be accorded by the Bloomington-Normal American Legion Honor
Guard.

Interment will be at East Lawn
Memorial Gardens in Bloomington.  Memorials may be made to
West Olive United Methodist Church in Bloomington or Shriners
Children's Hospital.  Kibler-Brady-Ruestman Memorial Home in
Bloomington is assisting the family with arrangements.

He was preceded in death by his
parents and three sisters, Opal Cohee, Maxine Wells and Evelyn
Bost.

Jack graduated from Bloomington
High School in 1942.  He worked as a conductor for GM & O
Railroad until retiring in 1986.

He proudly served his country in
the United States Army, during WWII serving in the 78th
Infantry Division in the European Theater.

He loved playing golf and was a
longtime member of Lakeside Country Club.  He enjoyed spending
winters in Texas for over 19 years.

Jack was a great father and was
loved and will be missed by all.

To send flowers to the family or plant a tree in memory of Jack C. Jolliff, please visit our floral store.

To send flowers to the family in memory of Jack Jolliff, please visit our flower store.