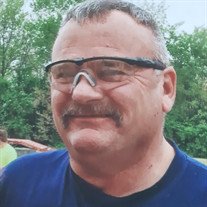 J.A. Seanard, Jr., 58, of Dana, IL, passed away at 2:05 a.m., Saturday, April 11, 2020 at St. James Medical Center in Pontiac, IL.
He was born January 3, 1962 in Streator, IL to J.A., Sr. and Sheron (Craig) Seanard. He married Kathleen (Webb) Taylor, whom he cherished and adored for 37.5 years, on December 17, 1983 in Santa Ana, CA. She survives.
Also surviving are his children Chad (Dixi) Taylor of Penngrove, CA and their children, Ashton and Billie; Lance (Paige) Taylor of Loveland, CO and their children, Katana, Piper and Latham; Debbie Seanard and her husband of Peoria, IL and their children, Kweilyn and Jameia; Tammy (Brian) Jackson of Severance, CO and their children, Ethan, Brenden, Alexa and Canaan; Sara (Christopher) Seanard-Tredway of Severance, CO and their child, Dallas; one sister, Terresa Byler of Toluca, IL; one brother, Hugh "Boone" (Chaylene) Seanard of Solon, IA, his father, J.A. Seanard, Sr. of Dana, IL, and his loyal dog, Kai.
He was preceded in death by his mother, Sheron Seanard, and grandparents, Dan and Nelda Craig.
J.A. was a dedicated Army veteran serving in multiple campaigns. He deployed to Iraq in 2004-05 attached to the 10th Mountain Division out of Fort Drum, New York, for the initial surge of the Iraq War, where he served as an elite combat engineer (sapper). He was a Purple Heart recipient and was awarded the Bronze Star for valor, as well as many additional military honors and medals. He held expert marksmanship and air assault badges, and was a former member of the VFW.
J.A. was the Fire Chief of the Dana Fire Department. He served on the board for MAMBAS 23 and was elected Secretary. He also enjoyed welding, woodworking, blacksmithing, fly fishing, and shooting. He was an artistic man with a love of working with his hands and building things. He was a former truck driver and homebuilder with North Star and Journey Homes. J.A. loved the outdoors. Most of all, he enjoyed spending time with his family and was adored by his wife.
Due to COVID 19, a private graveside service will be held on Thursday, April 16, 2020 at Dana Cemetery. This service will be live-streamed on the Ruestman-Harris Minonk Facebook page at 11:30 a.m. Thursday. There will be no visitation. A Celebration of Life service will be held at 11:00 am on Saturday, April 10, 2021, at the Dana Fire Department.
Memorials may be made to the Dana Fire Department, Minonk Ambulance or to his family to assist with funeral expenses.
Online tributes and condolences may be made at www.ruestmanharrisfuneralhome.com.

To send flowers to the family or plant a tree in memory of J. A. Seanard, please visit our floral store.

Please click here to view the video tribute
To send flowers to the family in memory of J. A. Seanard, please visit our flower store.