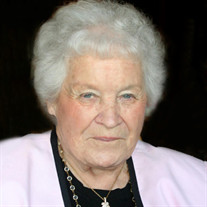 Interment will be at Evergreen Cemetery in El Paso. Memorials may be made to Maple Lawn Nursing Home in Eureka.

Ilene was born on February 3, 1930 in Danbury, Nebraska, a daughter to Fredrick and Katherine Vontz Weskamp. She married Kenneth D. Porth on October 15, 1950 at St. Patrick's Catholic Church in McCook, Nebraska. He preceded her in death on March 9, 2000.

She was preceded in death by her parents; an infant son, Terry Joe; five brothers and two sisters.
Ilene graduated from Red Willow High School and later graduated from the Beauty Academy in Lincoln. She opened and operated a beauty shop in her home for many years. She also worked as a waitress at Charlie's Place in Kappa for over 25 years. Ilene finished her career at Country Companies.

She was a loving mother, grandmother and friend and will be deeply missed.

Online memories and condolences of Ilene may be left for the family at ruestmanharrisfuneralhome.com.


To send flowers to the family or plant a tree in memory of Ilene Mary Porth, please visit our floral store.

Please click here to view the video tribute
To send flowers to the family in memory of Ilene Porth, please visit our flower store.