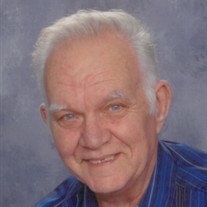 His funeral will be at 2:00 p.m. on
Thursday , February 27, 2014  at the Salvation Army Church, in
Bloomington with Pastors Captain Paul James and Captain DJ James
officiating. Visitation will be from 4 to 7 p.m. on Wednesday,
February 26, 2014 at Kibler-Brady-Ruestman Memorial Home,
Bloomington.

Gene graduated from Lincoln High
School in 1953 and served in the Army from November 1957 to March
1960. He began working for State Farm Insurance in 1960 and
continued there until his retirement in 1995. While at State Farm,
Gene served in the Administrative Services department.
Additionally, he worked at Chuck's Harley-Davidson from 1972
through the mid-1980's. He rode Harleys most of his adult life and
enjoyed several cross-country motorcycle trips. After earning
multiple flight certifications, as a part-time flight instructor he
taught dozens of students to fly. During this time, he owned a
Taylor Monoplane and a Piper J-3 Cub. He eventually fulfilled a
dream by building and flying an aerobatic Pitts Special. Gene was
also a founding member of SIRS, the central Illinois model airplane
organization. Again, as an instructor, he assisted hundred of
students learn to fly or improve their model flying skills. His
attention to detail earned him a high level of respect as a model
and full-size airplane builder and finisher.

In lieu of flowers, memorials may be made in Gene's memory to the
local Salvation Army or IOOF Children's Home at Lincoln, 721 Wyatt
Avenue, Lincoln, IL, 62656.

To send flowers to the family or plant a tree in memory of Homer Eugene "Gene" Barker, please visit our floral store.

To send flowers to the family in memory of Homer Barker, please visit our flower store.