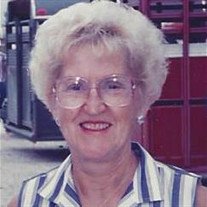 She was also preceded in death by one brother Paul Heike, sisters Dorthea and Ruth, and an infant daughter, Karen.

After attending business school she worked as a secretary for AE Staley in Decatur, IL, National Distillers and Hiram Walker, as well as Caterpillar Tractor Company of Peoria. After getting married she worked for Bloomington Livestock Commission Co. and El Paso Livestock Sale while doing books and helping her husband on the farm. She later acquired a real-estate license and attended income tax schools. Hilda was also a member of Trinity Lutheran Church in El Paso and held many offices with the local Society of the Lutheran Woman Missionary League (LWML) along with helping in many of the rallies. She was a historian/Secretary for the El Paso Farmers Club, and Secretary for Illinois Appaloosa Association and Eureka Saddle Club.

Funeral services will be held at 11 a.m., Wednesday February 4, 2015 at Trinity Lutheran Church in El Paso. Pastor Jonathan Boehne will officiate. Visitation will be one hour prior to services at the church. Burial will be in Evergreen Cemetery.

Memorials may be made to Trinity Lutheran Church.

To send flowers to the family or plant a tree in memory of Hilda Schertz, please visit our floral store.

To send flowers to the family in memory of Hilda Schertz, please visit our flower store.