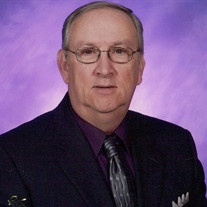 Herschell "Ed" Scott Jr 73, of Wenona, formerly of Odell, IL passed away on November 6, 2019 at St. Margaret's Hospital in Spring Valley. He was born on March 25, 1946 in Morris, IL the son of Herschell E. and Ezzie Patra (Cashmere) Scott Sr. He married Carolyn Becker on August 7, 1965 in Pontiac, IL.
Ed is survived by his wife Carolyn Scott of Wenona; 3 daughters: Amanda Scott of Washington, Nicole Scott of Des Moines, IA, Erica (Allen) Quick of Wenona; 2 brothers: Chris (Jennifer) Scott Sr., Roger (Kristi) Scott; 2 step sisters: Joyce (Dale) Griggs, Connie (Mike) Cooley all of Quincy; 9 grandchildren: Alex, Jeremy, Mackenzie, Matthew, Megan, Maggie, Nathan, Jaden, Mikayla; 2 great-grandchildren: Ahlay and Silas.
He was preceded in death by his parents and 1 granddaughter Natalie.
Ed enlisted in the U.S. Navy in 1963. He was stationed at the U.S. Naval Air Station, Glynco, Georgia. Where he worked in aviation support. After his enlistment he worked for Stark Construction in Bloomington as a Heavy Machine Operator. He also assisted Seggerman Farms for several years before becoming a Semi Driver for Luckey Trucking for 25 years retiring in 2015.
A memorial visitation will be held on Tuesday November 12, 2019 from 4 to 6 pm at Ruestman-Harris Funeral Home in Minonk, IL. Memorial Service will follow at 6pm Pastor Joy Miller will officiate the service.
Cremation rites have been entrusted to Ruestman-Harris Funeral Home. In Lieu of flowers the family has requested that donations be directed to the Alzheimer's Association. Online tributes and condolences may be made at www.ruestmanharrisfuneralhome.com.


To send flowers to the family or plant a tree in memory of Herschell "Ed" E Scott, please visit our floral store.

To send flowers to the family in memory of Herschell Scott, please visit our flower store.