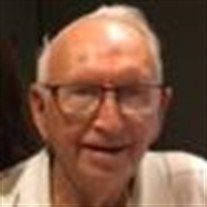 Harold was a proud farmer and involved in farming locally for his entire life. He served 30 years as President/Director of Secor Elevator, was a DeKalb seed corn sales representative, raised cattle, and did trucking and transporting of grain before finally retiring.

A private funeral service was held on Thursday, May 24, 2018, at Ruestman-Harris Funeral Home in El Paso. Burial was in Evergreen Cemetery.

Memorials and contributions in Harold's honor may be made to the charity of the donor's choice.


To send flowers to the family or plant a tree in memory of Harold E. Stauter, please visit our floral store.

Please click here to view the video tribute
To send flowers to the family in memory of Harold Stauter, please visit our flower store.