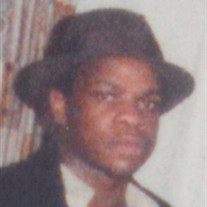 Bloomington - Gregory Lee Thompson, 49 of Bloomington, passed
away at 4:57 p.m. on Wednesday, December 25, 2013 at Advocate
BroMenn Medical Center in Normal.

Gregory was born on September 1, 1964 in Bloomington, the
youngest of five children, a son to Arthur Michael and Marilyn
Waddell Thompson.

He was preceded in death by his
father, Arthur Michael Thompson and brother, Michael (Mickie)
Thompson.

Gregory graduated from Bloomington
high school.  He proudly served his country in the United
States Army and the Army Reserves.

In 2001, Gregory moved to
Sacramento, CA.  He was employed as a contract carpenter
building homes.  He attended truck driving school and received
complete certification as a long haul truck driver.  In 2007,
he moved back to Bloomington and continued working as a long haul
truck driver until he retired.

He was a faithful member of Christ
Temple Apostolic Pentecostal Church in Bloomington.  He
confessed Jesus Christ as his Lord and Savior as a young man
baptized in the name of Jesus and received The Holy Ghost speaking
in Tongues as the Spirit of God gave utterance.  He attended
Sunday school, bible study, participated in the church choir and
was the driver for the CTAPC transportation church van.

A funeral service will be held at
7:00 p.m. on Thursday, January 9, 2014 at Christ Temple Apostolic
Pentecostal Church in Bloomington with Pastor Melvin Campbell
officiating.  Visitation will be on Thursday from 4-7: p.m.
before the service at the church.  Interment will be held at
10:00 a.m. on Friday, January 10, 2014 at Evergreen Memorial
Cemetery in Bloomington.  Kibler-Brady-Ruestman Memorial Home
in Bloomington is assisting the family with arrangements.

Military rites will be accorded. In
lieu of flowers, memorials may be sent to Christ Temple Apostolic
Pentecostal Church in Bloomington.

To send flowers to the family or plant a tree in memory of Gregory L. Thompson, please visit our floral store.

To send flowers to the family in memory of Gregory Thompson, please visit our flower store.