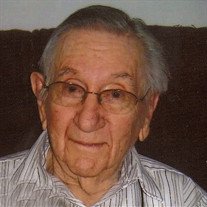 Glenn graduated from Tremont High School in 1937 and served in the U.S. Army during World War II in the 768th Field Artillery, leaving the service as a staff sergeant.

After the war, he became a milk tester on a government GI program and met Marjorie when he came to her family farm to test milk. After they married, they lived in Hopedale where he began as a dairy farmer. In 1960, they moved to a farm near Flanagan where he raised hogs until he retired in 1985. In November of 1986, they moved to a duplex at the Good Samaritan Home. Particularly in retirement, he was an avid St. Louis Cardinals baseball fan.

Glenn was a member of St. Paul's United Church of Christ in Minonk where he had served on the Church Council.

He was also a member of Flanagan American Legion Post #456, the Livingston County Farm Bureau, Livingston County Pork Producers, and for many years was a 4-H leader. He served terms as well on the Flanagan Park Board and the Waldo Township Board.

A funeral service will be held at 10:30 a.m., Saturday, May 9, 2015 at St. Paul's UCC in Minonk. Pastor Ed Sinclair will officiate. Visitation will be from 4 to 7 p.m. Friday, May 8, at the Ruestman-Harris Funeral Home in Minonk and Saturday a half hour before the service at the church. Burial will be in Center Cemetery outside Flanagan. A luncheon will follow at the church.

Memorials may be made to St. Paul's UCC in Minonk, the Good Samaritan Home, American Legion Post #456 in Flanagan, and to the Livingston County Health Department Donation Fund in Pontiac. Online tributes and condolences may be made at www.ruestmanharrisfuneralhome.com.

To send flowers to the family or plant a tree in memory of Glenn R. Hillman, please visit our floral store.

To send flowers to the family in memory of Glenn Hillman, please visit our flower store.