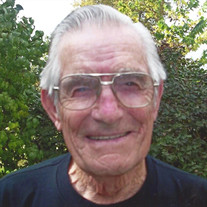 El Paso- Gilbert C. Vogel 95, of El Paso died at 4:20 p.m. on September 30, 2017 at Advocate BroMenn Regional Medical Center, Normal.
Mass of Christian burial will be at 10:00 a.m. on Wednesday, October 4, 2017 at St. Mary's Catholic Church, El Paso. Father John Steffen will officiate. Burial will be in St. Joseph Catholic Cemetery, El Paso with military honors. Visitation will be from 4 to 7 on Tuesday, October 3, 2017 at Ruestman Harris Funeral Home, El Paso with recitation of Rosary at 7:00 p.m.
In lieu of flowers memorial contributions may be directed to El Paso Emergency Services.
Gilbert was born October 30, 1921 at Benson a son of Aloys and Julia Linneman Vogel. He married Ruth D. Cabal on June 24, 1944 at Benson. She died December 27, 2010.
Survivors include his son, Gary (Sandy) Vogel, Bloomington, two grandchildren, Ryan (Jennifer) Vogel, Congerville and Ashlei (Brad) Stare, St. Charles; four great grandchildren, Colin, Kira, Jackson and Colton; three brothers, Fred Vogel, Vancouver, WA, Loren (Ann) Vogel, Montgomery, TX, and Frank (Lois) Vogel, Newton, IA; a brother in law Bob Damm of East Peoria.
He was preceded in death by his parents, a daughter Marcia Tegard, two brothers, Howard and Alvin, a sister, Mary Damm and a grandson Clyde Troy Tegard.
Gilbert served with the United States Army stationed at Newfoundland during WW 2. Gilbert was a member of St. Mary's Catholic Church, El Paso and the El Paso VFW. He had worked for Pfister Hybrid Corn Company in El Paso for 46 years.
He was a treasured husband, father, grandpa and great grandpa. He enjoyed gathering with family and friends. He loved playing cards and taking his truck to get wood for his wood burning fireplace. He was an avid gardener and enjoyed his flower and vegetable gardens and sharing the produce with his friends and neighbors. He gave freely of his time and his heart and was his wife's best buddy.
Gilbert loved his neighbors Jim and Nancy Green, they always watched over him and helped him. His family would like to thank the doctors and nurses at Advocate BroMenn Hospital and Hospice for their exceptional care.


To send flowers to the family or plant a tree in memory of Gilbert C. Vogel, please visit our floral store.

Please click here to view the video tribute
To send flowers to the family in memory of Gilbert Vogel, please visit our flower store.