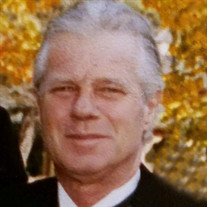 Gerald "Jed" Robert Allen, 68, formerly of Metamora and a 25-year resident of Colorado Springs, CO passed away unexpectedly on Friday, April 28, 2017 at his home.

He was born on January 25, 1949 in Peoria, IL to Geraldine (Lewis) and George Washington "Cotton" Allen. He is preceded in death by his mother, father, and a sister, Francis Clemonds.

Jerry was a lover of life and God. He started each morning with a daily devotion to his faith. He served his country in the United States Army during the Vietnam War where he was decorated as a hero before being honorably discharged for his service. Additionally, he brightened the lives of readers as a published poet by writing under a pseudo name, R. J. Fleming. He enjoyed spending mornings fishing with his kids and grandkids and was looking forward to spending the coming years traveling the country with his soulmate. He always did anything for a shiny nickel.

Funeral services will be held at 1 p.m. on Friday, May 5, 2017 at St. John's Lutheran Church in Secor. Rev. Michael J. Peters will officiate. Visitation will be two hours prior to services at the church from 11 a.m. to 1 p.m. Burial will be at Secor Cemetery. Ruestman-Harris Funeral Home in El Paso is assisting the family with arrangements.

Memorials may be made to a charity of the donor's choice.

To send flowers to the family or plant a tree in memory of Gerald "Jed" Robert Allen, please visit our floral store.

To send flowers to the family in memory of Gerald Allen, please visit our flower store.