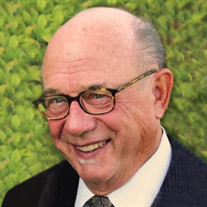 George P. Foeller, 89, of Hudson, passed away peacefully at 9:15 a.m., Tuesday, December 8, 2020 at his home with his wife and caregiver by his side after a year-long health struggle.

He was preceded in death by his parents Harold and Susan Foeller and brothers Henry and Robert Foeller.

George served as a musician in the U.S. Air Force Drum and Bugle Corps during the Korean War. He graduated from the University of Connecticut and studied under professor Mark Hinesley at the University of Illinois. After a long career in music education at Illinois State University, George's proudest achievements were conducting the ISU Marching Band (known today as the Big Red Marching Machine), concert bands and the Bunny Band. He arranged music for the latter which he used for the annual Easter time recording session of "The Heritage of the March" series of CD's that have been widely distributed throughout the U.S. and Europe. Sometimes he conducted the Prairie Winds Band at ICC.

He was admired, loved and respected by students, band members and friends. He planned and guided several student music tours in Europe. He will be missed dearly.

Cremation will be accorded. Ruestman-Harris Funeral Home in El Paso is assisting the family with arrangements. There will be a private, immediate family event of scattering his ashes in his memory.

Due to the Covid-19 pandemic, a Celebration of Life service has been postponed till 2021.

To send flowers to the family or plant a tree in memory of George P. Foeller, please visit our floral store.

To send flowers to the family in memory of George Foeller, please visit our flower store.