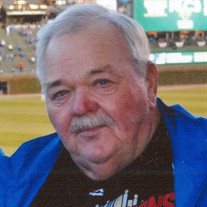 Secor- Gary Robert Wills, 66, of Secor passed away on April 04, 2018 at his residence. He was born on May 08, 1951 in Bloomington, IL to Earl and Donna (Punke) Wills. He married Connie Oertwig on September 25, 1976 in Normal, IL. She survives.
Gary is survived by four sons Christopher (Trisha) Oertwig of El Paso; Steven (Erin) Wills of McLean; Cory Wills of Secor; Kevin (Katie) Wills of Bloomington; one brother Darrell Wills; 15 grandchildren and 4 great-grandchildren.
He was preceded in death by his parents and one sister.
He worked as a salesman for the Coca-Cola Company for many years. Big Daddy was known as a jack of all trades.
He was a member of Pheasants Forever and the McLean County Sportsman's Club. He was an avid fan of hunting; fishing; the Chicago Cubs and the Chicago Bears. He enjoyed many trips to Eagle River, WI. His grandchildren and great-grandchildren were the pride and joy of his life.
A celebration of life will be held on April 22, 2018 from 1pm to 4pm with a time of reflection starting at 2pm at the Venue 27 in El Paso, IL.
Cremation rites have been entrusted to Ruestman-Harris Funeral Home in El Paso. In lieu of flowers the family has requested that memorial contributions be made to the Children's Hospital of Peoria. Online tributes and condolences may be made at ruestmanharris.com.

To send flowers to the family or plant a tree in memory of Gary Robert Wills, please visit our floral store.

To send flowers to the family in memory of Gary Wills, please visit our flower store.