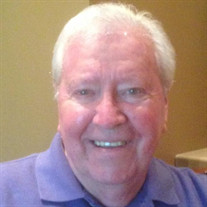 Private family services will be held with burial in Evergreen Cemetery, El Paso. Ruestman-Harris Funeral Home is assisting his family with arrangements.

Frederick was born February 18, 1938 at Ambridge, PA a son of Frederick C. and Armelda Kline Luedtke. He married Linda Gerdes on November 27, 1981 in Benson. She survives.

He was preceded in death by his parents, mother and father in law, and 2 brothers in law.
Throughout his career in agri-related businesses he served as General Manager for grain elevators in Illinois and Missouri and was co-owner of a family business. He was involved in many civic and fraternal organization also. His family would like to thank the remarkable staff at Good Samaritan Home in Pontiac as well as OSF Hospice.

Online tributes and condolences may be made to his family at www.ruestmanharrisfuneralhome.com.

To send flowers to the family or plant a tree in memory of Frederick J. Luedtke, please visit our floral store.

To send flowers to the family in memory of Frederick Luedtke, please visit our flower store.