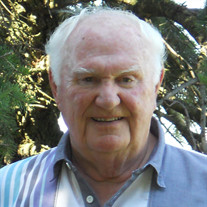 MINONK- Frederick Donald Baker died Sunday, April 23 at St. Joseph's Hospital in Bloomington in the company of his family. He was born in Minonk to Ed and Sue Baker on November 20, 1933. He was married to Irma (Barth) in June of 1960 and they were together for 52 years before she passed in 2012.
He was preceded in death by his parents, his brothers John and Bonner, and his sister Betty Hasty.
He is survived by their three children: Dennis (Sheri) Baker, Elizabeth (Jim) Rogers, and Marion (Jeff) Kennel. They had ten grandchildren: Ryan, Ben and Hannah Baker; Kylie (Brad) Montgomery, and Makenzie Rogers, Matthew, Elli (Drake Hoffman), Jessi, Emma, and Abbi Kennel. They had one great granddaughter, Brynlee Montgomery who was his special girl. His sister Jo Ann Schmillen also survives.
Fred was a wonderful father and a devoted husband, who loved being Papa to his grandchildren and great grandchild. He was proud of his service in the Navy aboard the USS Essex during the Korean War and kept in contact with shipmates, attending many Essex reunions with his wife over the years. He was known for his sense of humor and dry wit that often left friends chuckling after a conversation.
He retired from a Streator glass factory where he worked for 36 years. He very much enjoyed riding his scooter around town, afternoon trips in his golf cart to visit with friends at the "cannon park", and watching the Cubs. He lived to see it!
Visitation will be held at Ruestman-Harris in Minonk on April 25 from 4-7 pm. The funeral service will be held at St. Paul's in Minonk at 11:00 am on April 26 with a visitation at 10:00 until time of service. Burial will be in Minonk Township Cemetery with military honors to be presented. Please dress casually, Dad always did. Wear your "Freddy Bakers" if you have some. He will be missed by all, except the squirrels in his neighborhood with whom he had a running battle for years.
Donations can be made to the Minonk Ambulance Squad or St. Paul's UCC in Minonk. Online condolences may be sent to www.ruestmanharrisfuneralhome.com.

To send flowers to the family or plant a tree in memory of Frederick Baker, please visit our floral store.

Please click here to view the video tribute
To send flowers to the family in memory of Frederick Baker, please visit our flower store.