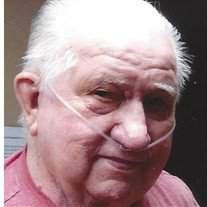 Fred "Fritz" Arndt, 86, of Rutland, passed away at 1:44 p.m., Saturday October 10, 2015 at OSF St. Frances Medical Center in Peoria.
He was born March 31, 1929 in Rutland to Henry G. and Anna F. (Stimac) Arndt. He married Martha B. Dronenberg on July 9, 1960 in Rutland. She died in 2007.
He was also preceded in death by 5 brothers, Don, John, Jim, Bill, Tom and 2 sisters Anna Louise and Catherine.
Fred is survived by 5 sisters Eva Carvich of Rutland, Carol (Bill) Blair of Rutland, Patricia Franklin of Spring Valley, IL, Mary (Leroy) Kerns of Rutland, Barbara Arndt of Rutland, one step-son Larry Robisky of South Elgin, IL and several nieces and nephews.
Fred was a U.S. Army veteran serving during the Korean War. He was a life member of the Rutland American Legion Post #1121 and Minonk VFW Post #7185, a member of the Loyal Order Of Moose Lodge in Bloomington and former member of Sacred Heart Catholic Church in Rutland. Fred was also a lifetime avid Chicago Cubs fan.
Fred worked as a driver for UPS in Peru for 30 years before retiring. After retirement he worked 21 years as a bartender at Jess's Pub in Minonk. Fred touched the hearts and lives of many and he will be forever missed.
A funeral Mass will be held at 10:30 a.m., Wednesday, October 14, 2015 at St. Patrick's Catholic Church in Minonk. Franciscan Friars will officiate. Visitation will be held from 4-7 p.m., Tuesday, at Ruestman-Harris Funeral Home in Minonk. Rosary will be said at 3:30 p.m., Tuesday before visitation. Cremation will be accorded. Burial of his ashes will be in Riley Cemetery in Rutland at a later date.
Memorials may be made to the Rutland American Legion Post #1121, Mass Cards or the charity of the donor's choice.
Online tributes and condolences may be made at www.ruestmanharrisfuneralhome.com.


To send flowers to the family or plant a tree in memory of Fred Arndt, please visit our floral store.

To send flowers to the family in memory of Fred Arndt, please visit our flower store.