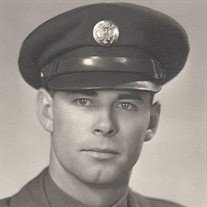 Gridley-Everett J. Gapen, 87, of Gridley passed away at 8:54 am on Thursday, August 20, 2015 at the Flanagan Rehab and Health Care Center in Flanagan, IL.

He was preceded in death by one brother and one sister.

An Army veteran, Everett served during the Korean War from 1951-1953 and attained the rank of Master Sergeant. He later joined the National Guard.

He worked for ConEd from 1948-1963 and then retired to start his own business, Gapen Electric. He enjoyed living in Arizona for over 40 years.

Cremation rites will be accorded and private family inurnment will be in Gridley Cemetery at a later date. Ruestman-Harris Funeral Home in El Paso is assisting the family with their arrangements.

To send flowers to the family or plant a tree in memory of Everett J. Gapen, please visit our floral store.

To send flowers to the family in memory of Everett Gapen, please visit our flower store.