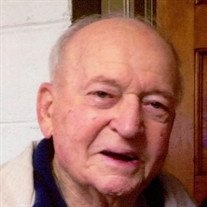 He was preceded in death by his parents, one brother, Duke Defenbaugh, two infant sisters and one infant brother.

Eugene farmed in the Dana area all of his life, retiring in 1994. He was also a salesman and district sales manager with the Moorman Manufacturing Company in Quincy, IL for 20 years.

Eugene was one of the original fireman when the Dana Fire Protection District was formed in 1954 and retired from the department after 28 years of service in 1982. Eugene had served as a village board member, president of Tall Oaks Country Club in Toluca, IL, Dana Fire Protection District, former member of the Masonic Lodge in Longpoint, IL. He was also a member of the Rutland American Legion.

Eugene served his country in the United States Army, serving the rank of Private First Class.

He had a passion for golf. He loved animals and farming, and was well known for his wit. He and Lila enjoyed wintering in Venice, FL for 25 years. He was a loving husband, father, grandfather, and great-grandfather who was generous in many ways and will be dearly missed by us all.

Memorial contributions may be directed to the Dana Fire Department. Online condolences and tributes may be sent to the family at www.ruestmanharrisfuneralhome.com.


To send flowers to the family or plant a tree in memory of Eugene L. "Muscles" Klendworth, please visit our floral store.

To send flowers to the family in memory of Eugene Klendworth, please visit our flower store.