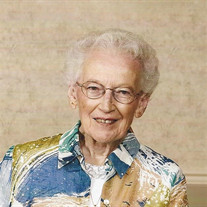 She was preceded in death by her parents and one brother.

Ethel was a homemaker on their farm for over 60 years. She enjoyed painting, reading, music, and spending time with her family. She was an avid collector of everything that was butterfly.
Funeral services will be held at 11:00 am on Friday, August 28, 2015 at Ruestman-Harris Funeral Home in El Paso. Rev. Wes Ooms will officiate. Visitation will be held on Thursday from 5-7 pm at the funeral home. Burial will be in Evergreen Cemetery in El Paso.

The family would like to extend a special thank you to caregivers Julie, Shirley, Deb, Nancy and the Hospice Compassus Team.


To send flowers to the family or plant a tree in memory of Ethel L. Ficken, please visit our floral store.

Please click here to view the video tribute
To send flowers to the family in memory of Ethel Ficken, please visit our flower store.