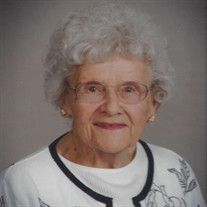 Esther Eloise Matzke, 98, of Springfield, passed away at 3:00 a.m. on Monday, March 23, 2020, at Regency Care in Springfield.
Esther was born August 29, 1921, in Quincy, the daughter of Henry and Mary Wolfmeyer Hoener.
She was a graduate of Quincy High School, class of 1939. After graduation, she worked for the Ely & Walker Dry Goods Company as a seamstress and also was very active with her church, St. James Lutheran in Quincy. She married Rev. Marvin L. Matzke on June 12, 1949, after he graduated from the Concordia Lutheran Seminary of Springfield. Esther and Pastor Matzke served churches in Creston, IA; Chapin, IL; Nokomis, IL; El Paso, IL; and Normal, IL, where he served as a Pastor for the Lutheran Church, Missouri Synod. Esther was a homemaker, a member of Lutheran Women's Missionary League, Illinois Home Extension and the Illinois African Violet Society. Esther loved to make crafts, knit and sew. She received several awards for her sewing of clothes, knitting and growing African Violets.
Esther is survived by her husband, Marvin; sons, Mike (Marsha) Matzke of Springfield and Dan (Meg) Matzke of Mapleton; daughter, Joyce (Dave) Cress of Fillmore, and son Tim (Stephanie) Matzke of El Paso, twelve grandchildren, and 18 great-grandchildren. She was preceded in death by her parents, her twin brother, Chester Hoener, and a great-grandson.
Esther was a member of Our Savior's Lutheran Church in Springfield. A graveside service will be held at the Evergreen Cemetery in El Paso with Rev. Jonathan Huehn of Christ Lutheran Church of Normal officiating. Due to the COVID-19, a celebration of life will be held at a later date at Christ Lutheran Church in Normal. Ruestman-Harris Funeral Home of El Paso is in charge of the arrangements.
Memorial contributions may be directed to The Lutheran Women's Missionary League (LWML).
Online tributes and condolences may be sent to the family at ruestmanharrisfuneralhome.com.

To send flowers to the family or plant a tree in memory of Esther Eloise Matzke, please visit our floral store.

To send flowers to the family in memory of Esther Matzke, please visit our flower store.