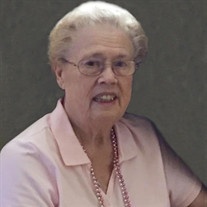 Esther Louise Gauger 86, of Minonk passed away on December 26, 2019 at the Heritage Manor Nursing Home in Minonk. She was born on April 17, 1933 in Rural El Paso the daughter of Samuel and Ruby (Hamilton) Walters. She married John A. Gauger Jr. on March 29, 1950 in Wolcott IN. He preceded her in death on December 17, 2002.
Esther is survived by 1 daughter: Karen (Larry) Schmitt of Tonica; 1 son: Gary (Teresa) Gauger of El Paso; 3 grandchildren: Lacy (Ryan) Orabutt; Neil (Becky) Gauger; Anna (Chris DeJaynes) Gauger and 6 great-grandchildren.
She was preceded in death by her parents, husband, 1 son: George, 1 great-grandson, 1 brother and 1 sister.
Esther worked for Caterpillar in Pontiac as a machine operator for many years. She was a member of the VFW auxiliary in El Paso and the UAW Campers Club.
A visitation will be held on December 30, 2019 from 12 - 2pm at Ruestman-Harris Funeral Home in El Paso. Funeral service will follow at 2pm. Pastor John Krug will officiate the service. Burial will be in Evergreen Cemetery.
Online tributes and condolences may be made at www.ruestmanharrisfuneralhome.com. Memorial contributions may be directed to OSF St. Francis NICU.


To send flowers to the family or plant a tree in memory of Esther Louise Gauger, please visit our floral store.

Please click here to view the video tribute
To send flowers to the family in memory of Esther Gauger, please visit our flower store.