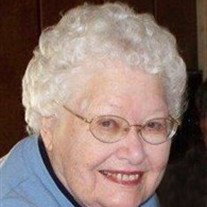 
She was also preceded in death by her parents, 3 brothers
and 2
sisters.


Erma attended Blackburn College in Carlinville, IL
and completed her education
at Illinois State University earning a Bachelor's degree in
Education.  She went
on to teach a total of 20 years in the Minonk and El Paso
area.  She was a
member of the Order of the Eastern Star, Amaranth Chapter.
She was also a
member of St. Paul's United Church of Christ in Minonk for 76
years.  Erma
enjoyed spending time with her family, traveling, camping and
fishing.  She
touched the lives of many and will be dearly missed.


Funeral services will be held at 11 a.m.,
Friday, March 28, 2013 at St. Paul's
United Church of Christ in Minonk.  Pastor Ed Sinclair will
officiate.
Visitation will be one hour prior to services at the church.
Burial will be in
Minonk Township Cemetery.


Memorials may be made to her church or the charity of the
donor's
choice.  Online tributes may be made at
www.ruestmanharrisfuneralhome.com
.

To send flowers to the family or plant a tree in memory of Erma Tjaden, please visit our floral store.

To send flowers to the family in memory of Erma Tjaden, please visit our flower store.