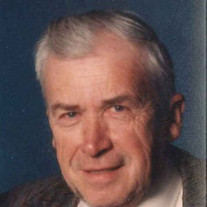 
He was preceded in death by his
parents, one brother, Russell Bradbury.


Emerson proudly served in the
United States Army from 1943-1945. He fought in WWII,
receiving the Purple Heart for his service and bravery.


Emerson was a very loving father,
grandfather and friend. He was a very dedicated businessman who ran
the North Side Grocery for more than 35 years. He is still known
for the best ham salad and hamburger. You won't find a better
butcher or father than him. Love you dad and grandpa. Emerson loved
animals and especially his Yorkie dog Rudy.


The family would like to thank the
staff at Heritage Health Nursing Home in Minonk for their kindness
and compassion. It was not only a profession it came from the
heart.


Memorial contributions may be made to Heritage Health Nursing
Home  in Minonk. Online condolences may be sent to the family
at www.ruestmanharrisfuneralhome.com.

To send flowers to the family or plant a tree in memory of Emerson Bradbury, please visit our floral store.

To send flowers to the family in memory of Emerson Bradbury, please visit our flower store.