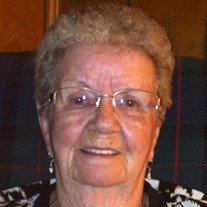 Funeral services will be at 11:00
a.m. on Monday, September 30, 2013 at Trinity Lutheran Church in
Bloomington with Pastor Chris Nitzel officiating.  Visitation
will be from 2-5:00 p.m. on Sunday, September 29, 2013 at
Kibler-Brady-Ruestman Memorial Home in Bloomington and one hour
prior to the funeral on Monday at the church.  Burial will be
at East Lawn Memorial Gardens in Bloomington.  Memorials may
be directed to the education fund for grandchildren's college fund,
Trinity Lutheran Church or the American Cancer Society.

Elizabeth was born on June 9, 1927
in Hopedale, a daughter to Ethelbert and Sadie (Tapp) Wilson.
She married Gene Westfall on July 2, 1949 in Bloomington, he passed
away September 1971.

She was preceded in death by her
parents, two brothers, two sisters and a son, Michael L.
Westfall.

Elizabeth retired after 42 ½ years
from State Farm.  She was also a Home Interior & Gifts
displayer for 25 years during and after her time at State
Farm.

She was a member of Trinity
Lutheran Church in Bloomington.  She was very social and never
knew a stranger.  She had a love for her kitties, was very
generous and she was known for her grandma kick boxing skills that
got her on The Price Is Right.

To send flowers to the family or plant a tree in memory of Elizabeth "Libby" Westfall, please visit our floral store.

To send flowers to the family in memory of Elizabeth Westfall, please visit our flower store.