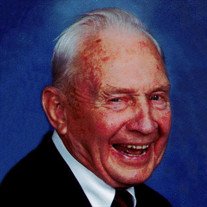 Due to concerns over the COVID-19 virus, a private graveside service for immediate family will be held at Minonk Township Cemetery. Military rites will be accorded. At a later date when the public health threat has ended, a Celebration of Life service will be held at St. Paul's United Church of Christ in Minonk. Memorials may be made to St. Paul's United Church of Christ, or the charity of the donor's choice.

Ruestman-Harris Funeral Home in Minonk is in charge of assisting the family with arrangements.

Eldon is survived by his wife Dorothy, to whom he was married 65 years, his son Brian (Yvonne) Folkerts of Alexandria, Virginia, two grandchildren, Kristen Folkerts of Washington, D.C. and Eric Folkerts of Fort Collins, Colorado, his brother, Ronald (Dorothy) Folkerts of Washington, IL, and numerous nieces and nephews. He was preceded in death by his parents Lena and John Folkerts, his sister Marie Oltman, brother Virgil Folkerts and sister Lorene Johnson.

Eldon was born on November 30, 1926 to Lena (Gastman) and John Folkerts at the family farm near Benson, Illinois and attended a one-room school until his family relocated to a farm near Rutland in 1938. He graduated from Rutland High School in 1944.

He married Dorothy Jury in 1954 at the First Presbyterian Church in Minonk, and farmed in the Rutland and Minonk areas until his retirement in 1991. Eldon served two elected terms on the Marshall County Board of Supervisors, and for forty-five years in various leadership roles at the Minonk Presbyterian Church. He was a member of the American Legion and the Veterans of Foreign Wars.

Eldon enjoyed many interests, including politics and local history. For decades he drove in local parades either a 1951 Dodge sedan or a 1924 Model T truck, both family heirlooms that he restored. He was well known in the area for repairing and restoring clocks and watches, and for his unique ability to successfully "find water" through the art of "dowsing". He enjoyed socializing with friends and neighbors at local restaurants, and at home over a lively game of ping pong. Eldon was never without a smile, and was kind to all. He had an easy laugh and a warm sense of humor. He will be greatly missed by his family and those who knew him.

To send flowers to the family or plant a tree in memory of Eldon Folkerts, please visit our floral store.

Please click here to view the video tribute
To send flowers to the family in memory of Eldon Folkerts, please visit our flower store.