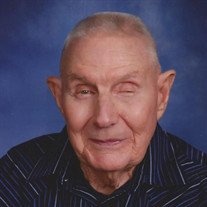 He was born on July 5, 1929 in Normal, IL the only son of Edward Earl and Dorthea "Dora" Stimpert Longman. Earl lived all of his life in Panola with his mother as his father died when he was 5 years old. He met Joy Rogers in 1951 and they were married August 17, 1952 in Taylorville. They lived in Earl's grandparents family home for 64 years.

He was preceded in death by his parents, one son John; and a granddaughter Sadie.

Earl raised hogs from the age of 12. He and his sons created a business and had 2,500 hogs a year, for some time. When Earl retired from raising hogs, he and Joy raised Soft Coated Wheaton Terriers with the help of Ed and Lisa Longman. Earl still drove a tractor and helped with the mowing up until a year ago.

Earl was a member of St. Paul's United Church of Christ in Minonk where a memorial service will be held at 11:00 A.M. on Friday, September 2, 2016. Rev. Ed Sinclair will officiate. Visitation will be held on Thursday from 4-7 pm at the Ruestman-Harris Funeral Home in Minonk. Inurnment will be in Minonk Township Cemetery.

In lieu of flowers, Earl and the family ask that memorials be made to Flanagan State Bank, to the Nathan Schertz wheelchair fund, or St. Paul's Youth Group. Online condolences may be sent to the family at www.ruestmanharrisfuneralhome.com.

To send flowers to the family or plant a tree in memory of Earl Longman, please visit our floral store.

Please click here to view the video tribute
To send flowers to the family in memory of Earl Longman, please visit our flower store.