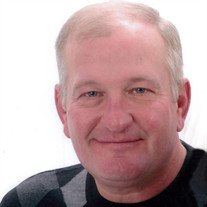 Pontiac-Douglas A. Smith, 55, of Pontiac formerly of Flanagan, IL passed away at his home at 4:55 pm on Monday, February 22, 2016 with his loving wife and family at his side.

He was born on October 24, 1960 in Bloomington, IL a son of Dale E. and Dorothy R. Miller Smith. He married his high school sweetheart, Karen Chambers on April 7, 1979 in Minonk. She survives.

Doug's passion was farming. He had the pleasure of farming alongside his father, Dale and then his son, Daniel. He owned and operated K & D Service and Repair and K & D Landscaping in Flanagan, Illinois.

Doug served as a member of the Nebraska Township Board, the Livingston County Board, and was active in various committees while serving on those boards.

Doug was also a member of of the First Baptist Church of Minonk. He was a devoted Christian and man of God, who lived his life to the fullest. He maintained his strong faith until the very end.

He loved vacationing with family, riding his Harley Davidson and spending time with his grandchildren.

He was loved by many and will be missed dearly.

A memorial visitation will be held on Friday, February 26, 2016 from 4-8 pm at the Ruestman-Harris Funeral Home in Minonk. Cremation rites will be accorded and a private family service will be held at a later date.

Memorial contributions may be made to OSF Hospice Eastern Region at 211 N. Landmark Dr. Suite D3 in Normal, IL 61761. Online tributes and condolences may be sent to the family at www.ruestmanharrisfuneralhome.com.


To send flowers to the family or plant a tree in memory of Douglas A. Smith, please visit our floral store.

Please click here to view the video tribute
To send flowers to the family in memory of Douglas Smith, please visit our flower store.