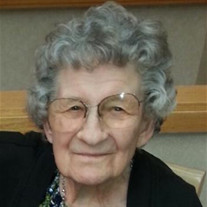 Doris E. Steury, 97, of Chenoa, IL, passed away peacefully at 9:42 a.m., Thursday, April 4, 2019 at Meadows Mennonite Home where she was a resident. Funeral services will be held at 10:30 a.m., Saturday, April 13th at Ruestman Harris Funeral Home, 40 West Main St. in El Paso, IL. Co-officiants will be two of Doris' nephews: Rev. Doug Habegger and Rev. Mark Steury. Visitation will be one hour prior to services at the funeral home on Saturday. Burial will be at Waldo Township Cemetery in rural Gridley.

Doris was born January 21, 1922 in Berne, Indiana, the daughter of Raymond and Mildred Moser. The oldest of 3 sisters, she grew up in a loving household. Doris was united in marriage to Howard C. Steury on August 20, 1949 in her parents' home in Berne. Doris and Howard were married for over 50 wonderful years. He preceded her in death in August of 2000.

Doris received her RN degree from Lutheran Hospital School of Nursing in Ft. Wayne, Indiana. She worked as a nurse until her first child was born, and then returned to the profession in the 1960s at the Neonatal Intensive Care Unit at St. Francis Hospital in Peoria, Illinois. A highly regarded and accomplished professional, Doris later became Education Coordinator for St. Francis' Neonatal Center and remained at the Center until she retired as Perinatal Coordinator in the early 1980s.

Doris's husband, Howard, was an engineer for Caterpillar Tractor in Peoria, Illinois. The couple raised their 2 sons and one daughter in Washington, Illinois where they were both active in Calvary Mennonite Church. Following retirement, they were longtime residents and dedicated volunteers at Meadows Mennonite Retirement Community and active members of their local Mennonite Church. Doris and Howard enjoyed their retirement, traveling and spending time with their children and grandchildren. They were wonderful parents and grandparents. After Howard's death, Doris became a great grandparent.

Doris was an excellent Mother, Grandmother and Great Grandmother. She is survived by her children and their spouses: Chuck (Sam Yamauchi) Steury of Portland, OR; John (Marlyn Ligner) Steury of Lisle, IL; and Christine (Peter) Schimpke of Haslett, MI. Doris is also survived by her 7 loving grandchildren and 7 great-grandchildren. In addition to her husband, Doris was preceded in death by her sisters Grace Habegger and Betty Habegger.


To send flowers to the family or plant a tree in memory of Doris Steury, please visit our floral store.

Please click here to view the video tribute
To send flowers to the family in memory of Doris Steury, please visit our flower store.