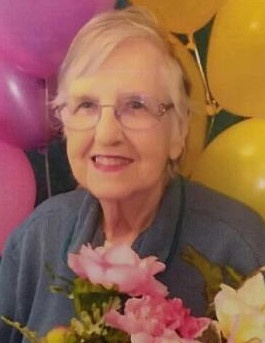 Donna Margot Oltman Gilmore, 91, of Tampa, Florida died peacefully at Arbor Terrace Memory Care with her youngest son at her side, on August 14, 2020, from Alzheimer’s Disease.

Donna was born March 14, 1929, in Rochelle, Illinois at the start of the Depression. She was the third child of Henry W. Oltman and Dora M. Barton with an older brother Ralph and sister Peggy. She also had a younger brother Jimmy who died as an infant. Donna is survived by her two sons, Jeffrey Lynn (Ursula) Gilmore of Clay, NY, and Barton LaTeer (Jennifer) Gilmore of Lutz, FL. She is also survived by three grandchildren, Sarah Lynn Gilmore of Chicago, IL, and Raina Kathryn and Reiland Wynn Gilmore of Lutz, FL.

Donna’s father was a mechanic in Rochelle, IL and her mom was a housewife. During the Depression, Donna’s family handed out food daily to the homeless hitching the rails as the family lived next to the railroad tracks. When WWII began, her sister became a member of the Navy WAVES and her brother was a navy sailor, both serving in the south pacific. After the war, her family moved and her father became a farmer on his family’s farm outside of Benson, a small rural town in the corn belt of Illinois. There, her father grew beans and corn, and raised chickens and cows. Donna attended Roanoke Township High School and was highly active in school clubs and organizations. She was a member of the mixed chorus, student council, girl’s glee club, marching band, Thespians, Operetta, Vice President of Future Home Makers of America, F.H.A. Council, Editor-in-Chief of ROVIC, Inkwell Editor, and Home Coming Queen. She won many literary and music awards and graduated with honors in 1947.

She then attended Illinois State University in Bloomington, Illinois on an honors scholarship in teaching. She also continued studying both music and literature. She was active in the Philadelphia Literary Society and Woman’s Chorus, as well as becoming a member of the Jesters Society and the honorary sorority Sigma Tau Delta. It was at I.S.U. where she met her future husband. She graduated with honors with a Bachelor of Arts degree and married Lynn Quentin Gilmore on Thanksgiving Day, November 23, 1950, in Minonk.

Lynn and Donna moved to Monmouth, Illinois where they had their first child, Jeffrey in 1951. A few years later, she gave birth to their second son, Barton, and moved to Park Forrest, Illinois a small town south of Chicago. There, she became an elementary school English teacher and learned how to play the piano.

Donna and Lynn moved to Livonia, Michigan a community outside of Detroit in 1963 where she continued as a full-time mom and housewife. Donna participated in the P.T.A., and becoming a Den Mother for the Cub Scouts of America.

In 1966 her husband accepted an administrative position in Fort Lauderdale, Florida with the Broward County Classroom Teachers Association (an N.E.A. affiliate). The family became members of Plantation United Methodist Church in 1967 and Donna joined the choir. Later in that same year she joined a bowling league and continued bowling until 2010. Donna also kept busy doing part-time work as a bookkeeper.

Memorial graveside services will be held at 11:00 a.m. on Saturday, July 30, 2022, at Minonk Township Cemetery. Online tributes can be sent to family at www.ruestmanharrisfuneralhome.com.

To send flowers to the family in memory of Donna Oltman Gilmore, please visit our flower store.