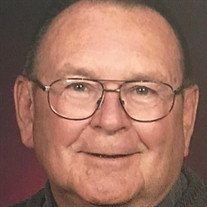 Don attended El Paso High School and graduated from Illinois State University where he majored in education, and participated in football and track. Don also attended the University of Illinois for his graduate work.

Don began his teaching career in Elliott, IL and shortly after became principal at Gibson City Elementary School and Junior High. In 1970, Don and his family moved from Elliott to McHenry, IL where he served as principal of McHenry Junior High and then Parkland Junior High until his retirement in 1987. Don was known as a caring educational leader and an advocate for all of his students. He was also a partner in owning and operating McHenry's Favorite Sport Center.

Don enjoyed sports and was an avid fisherman and hunter. He loved his family and friends, traveling, collecting treasures, and helping anyone in need.

Funeral services will be held at 11:00 a.m. on Saturday. March 23, 2019 at Ruestman-Harris Funeral Home in El Paso. Pastor Farrel Stauffer will officiate. Visitation will be held one hour prior to services on Saturday at the funeral home. Family burial will be in the Secor Cemetery.

Memorial contributions may be made to Donald Toole's Alzheimer's Association page on http://act.alz.org/goto/dontoole . Online condolences may be sent to the family at www.ruestmanharrisfuneralhome.com.


To send flowers to the family or plant a tree in memory of Donald L. Toole, please visit our floral store.

To send flowers to the family in memory of Donald Toole, please visit our flower store.